You may have a demo for the battery NP3 (deutsch,english,slovensky,česky) inclusive a handbook. Please contact here to order the demo.

Further versions of the NP3 battery

The HNP/THNP program combination and the HOME-NEUROP program battery for home-based cognitive training are modeled on the NP3 program in terms of content. HNP/THNP is used for professionally supervised neuropsychological therapy in the home environment, and HOME-NEUROP provides the opportunity to train on a variety of exercises at home. In both cases the results are automatically stored and can be evaluated later by the qualified supervisor.

HNP/THNP is consisting of two parts:
1./ HNP - the training program for the client
2./ THNP - the supervision programm for the supervisor 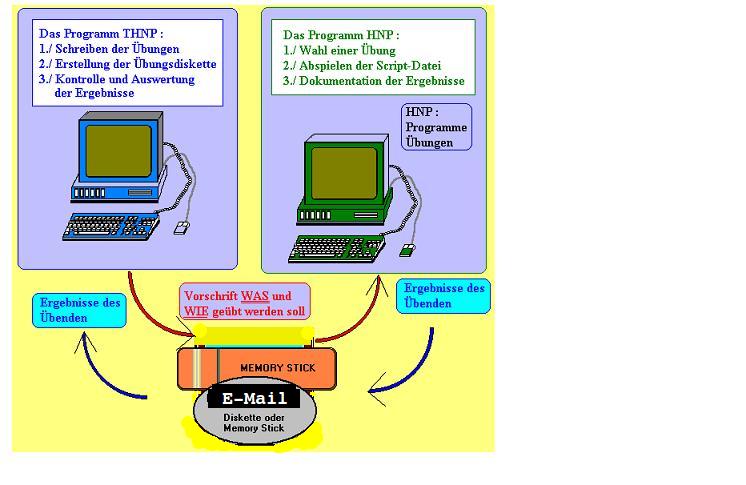 The real experience with these programs since 1999 has shown that it can be a promising path to therapy in the home environment. More information can be found by the interested reader in the free manual (PDF), which can be requested here.

HOME-NEUROP is the one man-version of the NP3 programm battery.

The user can independently select and perform exercises. His results are stored in the local database and are available for further evaluation.
In addition, he or she or another person (family members) can - taking into account of patient-specific circumstances (interests, hobbies, profession, etc.). - create any number of new exercises.

Here are some more informationens to find.

Neglect - Disorders of the personal space

Here you can see the flower that a 42-year-old well-trained patient with so-called neglect disorder had drawn. This disorder of attention, which often occurs after a right-brain injury, is clearly noticeable in the everyday life of the injured person but the affected person is not aware of his/her deficit (= anosognosia). 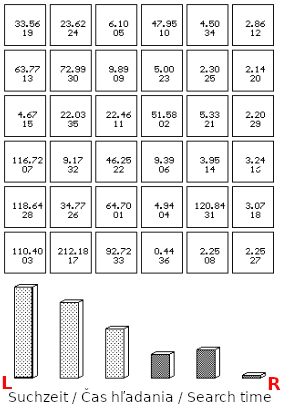 The most obvious sign of neglect disorder is poor orientation in the space. Thus, the affected person bumps conspicuously often into obstacles on one side of the body (mostly on the left): door frames, table edges, etc. But also his reactions to being approached from the affected side are strikingly diminished.
Remember: This is NOT a disorder of vision, but one of attention.

Disturbance of the ability to adequately judge the fellow human beings.
One of the consequences of the frontal brain injury 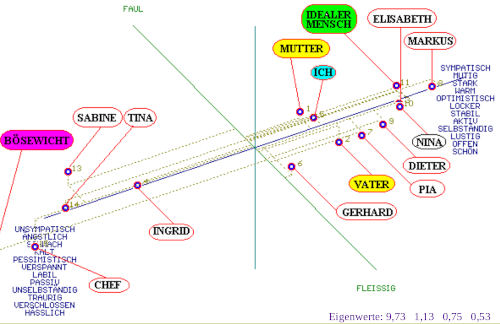 Injuries in the frontal brain lead to a series of impairments of the "higher" mental processes such as planning and action initiation, cognitive flexibility, coordination of information and processes, sequencing and goal monitoring, and many others. Researchers have shown that the reactions of the autonomic nervous system in social situations are often missing. As a result, their affective evaluations of their environment and fellow human beings flatten out. (Experimentally it could be shown that the skin resistance did not change during uncommented emotional scenes. This reaction occurred as a rule in healthy adults.)
The figure shows the factor analytic evaluation of a young woman's responses in the SEMDI (semantic differential) task. She was involved in an car accident and was unresponsive at the scene. MRI showed numerous pathological signal changes in the cerebral cortex frontal left (contusion hemorrhage left frontal), EEG : focal pathological findings both frontal sides.
The healthy subjects answer in this task in such a way that one can find by the mean of factor analysis at least 3 factors (so called E-A-P factors: evaluation-activity-potency). As can be seen in the picture, this young woman answered in a way that only one meaningful factor could be found.

The most frequent deficits after TBI 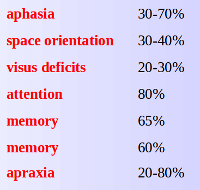 The brain injuries can lead to a number of impairments. Various authors give the following percentages of the disorders. 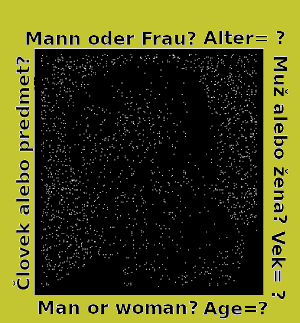 Can you recognize what is in the picture? Are there details of the object you could describe?


If you would you like to learn more about it.
go back to start